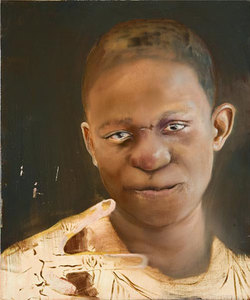 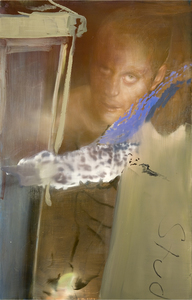 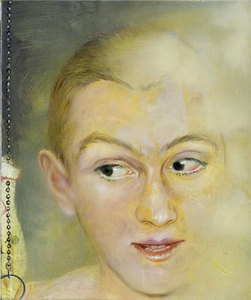 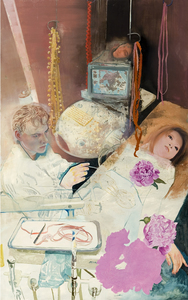 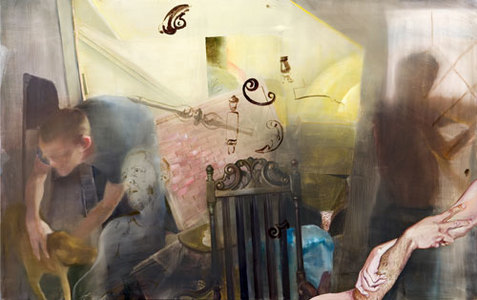 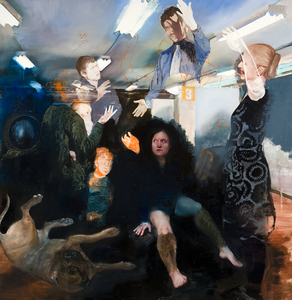 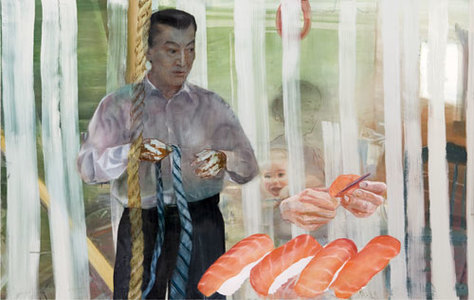 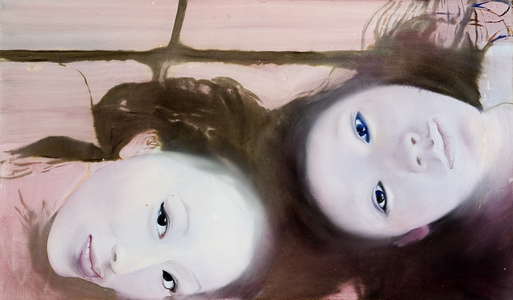 Morninghead, a collection of ten new oil paintings will be on view this fall at 33 Bond Gallery. This will be Laura Greengold’s first solo show in New York, which we are very proud to present. Greengold’s work traverses that twilight between waking and dreaming, a place that captures what Kafka called “a view of life in which life would both retain its ponderous rise and fall, but at the same time, be perceived as a nothingness, a dream, a hovering in the air.” Her brush takes those brief moments of disorientation that arrive between a particularly vivid nightmare and the silencing of an insistent alarm clock, and stretches them across a canvas. The larger paintings combine three-dimensional perspectives and the flatness of the collage style, creating layered sets of surreal scenes much like dream sequences. Here, a man operates on a prone woman’s midsection, but instead of the usual stitching thread, he uses ribbons; a young woman’s legs begin to grow fur; disembodied hands cut salmon for sushi.
However disorienting and erratic the images, the work is in no way vague and meaningless. Many of the works in the exhibition reference either sociopolitical conflicts or historical traumas: for example the Middle Eastern conflict, Abu Ghraib, and the Holocaust. Through a selection of suggestive images, Greengold invites the viewer to guess and perhaps project anxiety, violence, horror and all of the emotions these traumas can generate.
“In “Unknown,” Greengold capitalizes on the well-known Nazi gas chamber-as-shower deception by depicting an unknowing figure in the moment before he pulls the shower chain. Because he is unaware of what awaits him, the look on his face is almost gleeful, eager, hopeful; only we as viewers know better, or in this case, worse. Thus, the horror of the painting is intelligible only as much as it operates on assumptions and associations viewers bring to the experience of the painting. One could say that it is the viewer’s involvement—in fact, there were no actual chains in the gas chambers—that the anxiety and violence are rendered in the work at all. Greengold asks in these paintings, then, what the responsibility of knowing entails, since we can only judge a world that is as much dream and nightmare as it is real life with limited pieces of information and knowledge. In the end, it is our intuition that guides us, and not, ironically, the brute facts that we are able to grasp.” Debora Kuan
Loading...